In the summer months frothy sunshine-yellow Lady’s Bedstraw brightens the grass and on a warm sunny day scents the air with the delicate fragrance of fresh-cut hay.

Habitat: Lady’s Bedstraw most often occurs in dry habitats, often near to the sea. It grows in dry grassland, on dry banks, on downs and old established sand-dunes. However, it has also been seen beside wet flushes on coastal cliffs.

A native plant to Great Britain, Lady’s Bedstraw is a member of the Rubiaceae family. A near relative of goose grass, or cleavers, but has no prickles. This slightly downy and sprawling perennial plant, bears tiny bright yellow 4-petalled flowers (2-3mm ), borne in clusters. The stem is branched, square, long, thin and weak. Leaves are exceptionally small and borne in whorls of 6-8. 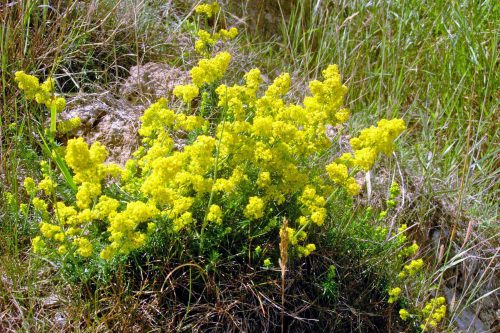 Lady’s bedstraw is a food source for the huge Elephant hawk-moth caterpillar, then is favoured by the adult moths as a rich source of nectar. The migrant Humming-bird Hawk Moth is attracted to it too.

One version of a Medieval legend has it that the Virgin Mary lay on a bed of Lady’s Bedstraw in the stable of the inn in Bethlehem; a variation is that she used it to line the manger in which she laid the baby Jesus. Either way is likely that the common name for the plant was taken from this legend. It also led to the belief that a woman lying on matress filled with Lady’s Bedstraw would have a safe and easy childbirth.

Lady’s Bedstraw was once one of the most useful of the meadow herbs; domestically it was used as a ‘strewing herb’, a natural form of air-freshening. The dried flower tops were used to stuff matresses, in part because the scent of the chemical coumarin produced by the plant acts as a deterrent to fleas.

In the north of England the yellow flowers were once used to curdle milk, giving rise to several associated names such as cheese rennet and cheese renning. The name of this genus, Galium, from the Greek word gala, milk, is supposed to have been given from this property of the plants. In Gloucestershire, it was used to colour Double Gloucester cheese. The leaves and stems yield a yellow dye and the roots a red dye, although as the plant parts are so small, large quantities are needed for that purpose; it was said that when cattle feed on it, it reddens their bones.

Lady’s Bedstraw contains the chemical coumarin, used in the drug dicouramol, which will prevent the blood clotting. In herbal medicine it was claimed the herb was a remedy for for urinary diseases, epilepsy and gout.