One of the prettiest wildflowers of late summer, brightening the British countryside from our lowland moors to mountain peaks. Adaptable little plants, Eyebright species are generally semi-parasitic, feeding off the nutrients from the roots of nearby grasses in undisturbed habitats.

Native to Great Britain, Eyebright is a member of the Orobanchaceae family (formerly included in the Scrophulariaceae family).

Status: Widespread throughout and locally common, but declining.

Habitat & Ecology:  Found in a wide variety of undisturbed grassy places on downs, pastures, heaths, cliffs and woods. Semi-parasitic they grow successfully only where their roots can attach themselves to other plants such as grasses, clovers and plantains. For this reason, they are quite useful plants in terms of keeping vigorous grasses at bay in order that wildflowers can thrive. 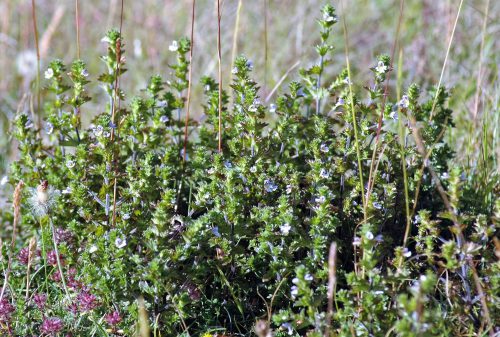 Eyebrights are extremely variable in appearance with 20 or more species that have a tendency to hybridise with each other, resulting in about 60 micro-species, so many would need an expert to make more than an intelligent guess at identification. My description refers mainly to the most frequently-occurring Common Eyebright – Euphrasia nemerosa. I have included images of variations that I have found locally, but would not like to even hazard a guess as to whether or not they may be recognised sub-species. 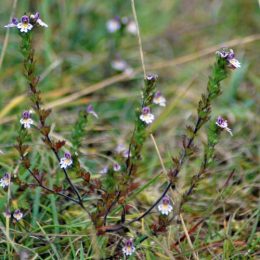 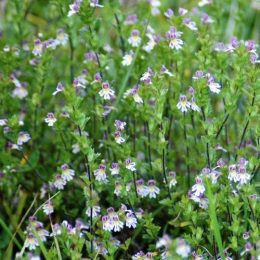 The small flowers are 5-10mm long, in leafy spikes; the corolla is two-lipped; lower lip is three-lobed; whitish in colour, but sometimes wholly or partly lilac; they have a yellow throat and purple veins, (nectar guides for insects), radiate from the centre towards the edges of the upper and lower petals: fruits are capsules: the stem is strong and branched, branches coming off in opposite pairs leaves are more or less oval, sharply toothed, pale, dark , bronzy or purplish-green and borne in opposite pairs.

Pollination: The lower lip of the flower acts as a landing stage for visiting insects which are then guided to the nectar source by the purple lines marked on its surface. The upper lip protects the stamens and the style, the latter projecting forwards so it touches visiting insects first and receives pollen from another flower, thus ensuring cross-pollination. As the insect probes deeply for nectar, pollen is showered onto its back from the stamens which are above it. 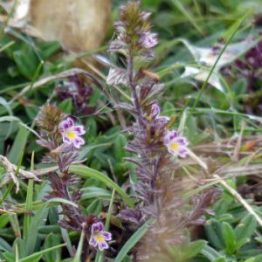 The generic name Euphrasia is derived from the Greek word euphraino, translated as ‘to gladden’, possibly a reference to the plant’s reputed medicinal powers ‘to gladden the eye’. The common name Eyebright may have come about for similar reasons or maybe just because the flowers do indeed have a bright eye.

The 17th century botanist, William Cole recorded in his book titled Adam in Eden, that eyebright was the herb used by the Linnet to clear its eyesight. In the 18th century, the belief was held that certain plants, based on their appearance or characteristics could cure human ailments. So maybe it is not surprising that this plant, with its ‘bright-eyed’ appearance was thought to improve poor eyesight. In ‘Paradise Lost’, the poet Milton wrote:

Which that false Fruit that promis’d clearer sight

Had bred; then purg’d with Euphrasie and Rue

The visual Nerve, for he had much to see.

An extract made from eyebright and the herb Golden seal is still used today as a lotion to relieve eye irritations and eye strain.