Weather has its part to play in the timing of the appearance of our wildflowers and this year has already presented our bit of the North Wales coast with a mixed bag of it. So far we’ve had cold frosty days, cold strong-windy days, bright sunshine-filled days and this week, mild but dull misty days. Generally January is probably the least productive month for wildflowers in Wales, and indeed most of the British Isles, but other than in the harshest of weather, there are some that are tough enough to bring forth their blossoms to brighten our walks.

“When gorse is not in flower, kissing is out of season”

The old quotation above is meant to imply that as kissing is never ‘out of season’, then rarely is gorse not in flower, which is largely true. Although it blossoms more prolifically in some months than in others, it is usually to be found somewhere along a walk, bringing a burst of welcome sunshine gold to the dullest January day. Although cold days don’t coax out the blossom’s delicious coconut-vanilla fragrance into the air, it’s always worth getting in close to seek it out. It’s such an uplifting scent. 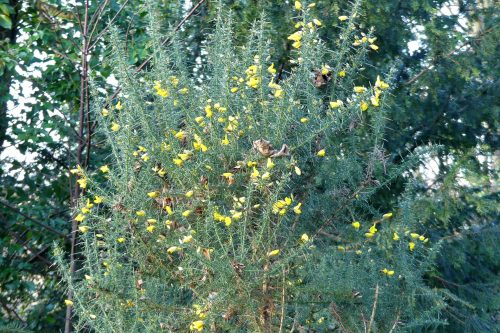 Winter heliotrope is another plant worth getting close to for their lovely vanilla-like scent. This is one of the more unusual wildflowers that grows here and I know of only two patches locally, so they probably originally escaped from one of the gardens of one of the nearby large Victorian houses.

Although they are a wild flower, the snowdrops I come across are mostly in gardens. These are my first ones for this year.

Hazel begins to produce its new catkins in the late autumn, but I was surprised to find one tree with a full crop of fully-grown catkins quite this early. It is one tree of many growing in a little grove of once-coppiced hazel trees that line part of one of my regular walking paths. I can’t begin to guess why it so far ahead of its neighbours, unless it has a particularly sheltered spot reached by the sun perhaps?

There may be a shortage of flowers to be found, but there are still berries to be found on holly, wild rose and hawthorn. They may not last long now as most will have been ‘frosted’, which may need to happen before birds eat them.

Fruits in the wake of  flowers 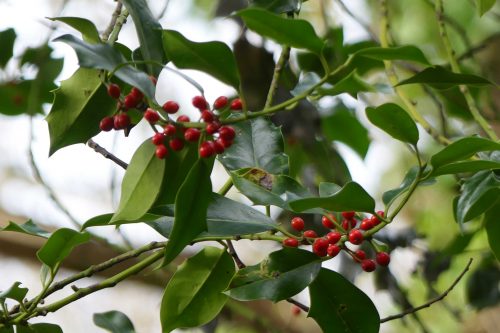 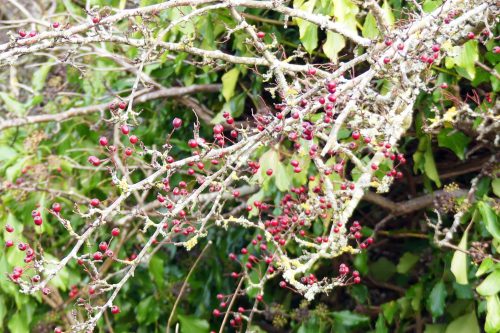 Tutsan is present here, doubtless a one-time escapee from a local garden but now included as a wildflower. It has retained many of its leaves and its berries are now fully ripe, black and beginning to wither.

Ivy is prolific here and berries are in varying stages of ripeness in different locations; they are an extremely important source of winter food  for many species of birds when little else is available to them.

The curious Stinking Iris (Iris foetidissima) is native to this part of the country and fairly prolific now, quite possibly due to the distribution of its bright red berries by birds, particularly blackbirds, although they are not eating them yet. It too retains its foliage throughout the winter. 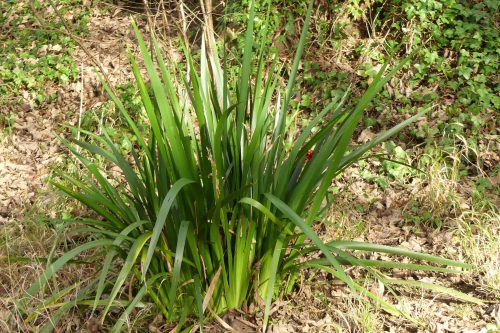 Some plants retain their seedheads throughout the winter, most famously the Wild Clematis, or Old Man’s Beard for the way in which it drapes its white fluffy seedheads over other shrubs. 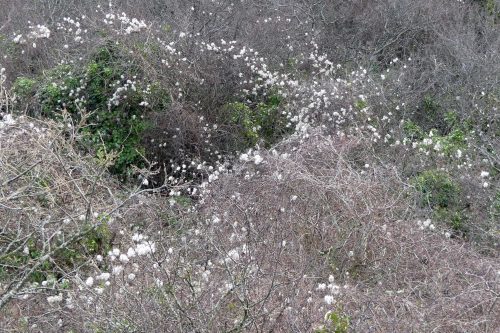 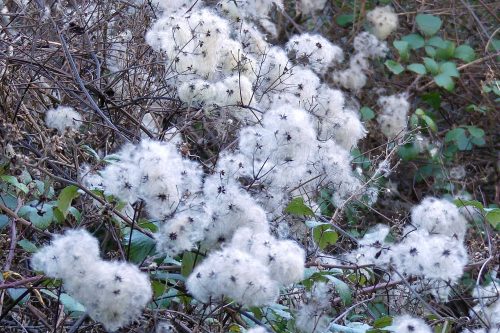 Knapweed too still has its seedheads and a stand of them on the hillside looked pretty when lit by the low sunshine.

When winters are mild, some wildflowers will produce blooms throughout the year. The starry little Common Daisy is one such, although this year I have seen only one so far.

In a sheltered corner of an old limestone ruin, a dainty Herb Robert shows a single little flower. I’m including this as a late survivor as this is not quite an all-year round plant, flowering ‘officially’ from (March) April to November.

Shetered by another wall, this time along the roadside, a Sow thistle, quite comfortable thank you. 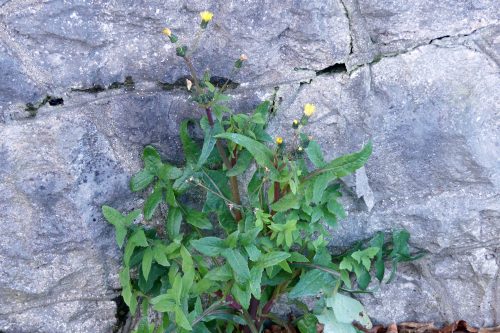 In sheltered spots there are already plants producing new leaves. Those of Alexanders, which will be one of the first to bring forth its flowers, usually during February, are already quite well grown in the shelter of the woods. 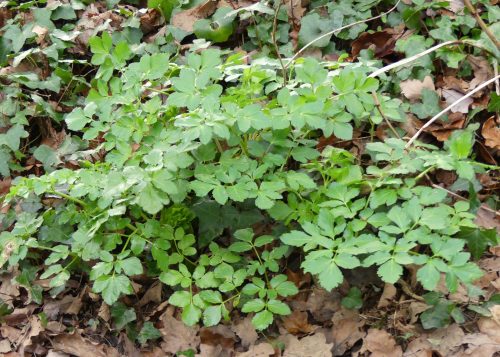 That’s what I’ve photographed in the last couple of weeks, so although January may appear to be resting time, just waiting for the Spring, nature never truly sleeps.

Blowing Away the Cobwebs

On the Trail of the Jackdaws of Conwy Town