Flowering prolifically along many of our roadsides and motorway verges nowadays, you may know this familiar and lovely daisy as the Ox-eye Daisy, but I grew up knowing it as the Moon Daisy, which I think is prettier. This is our largest native daisy. A typical grassland plant that would once have been common in meadows where there was long grass, this adaptable daisy also thrives on waste or disturbed grounds and also features along field edges and in other habitats now deliberately looked after for wildlife.

A swathe of moon daisies at Bodnant Gardens, North Wales

This is one of our loveliest summer flowers, producing blooms from June to September and frequently grows in masses of white. It is easy to identify by its large, round flower heads that appear on single, tall stems.

Many insect species are attracted to the flowers

The large daisy-like flowers (25-50mm) are actually not just one flower, but a composite of a number of tiny flowers which make up the yellow disc in the middle and the surrounding white ‘ray florets’ (which look like petals). They are borne on strong, erect, ridged stems (to 80cm high). The dark green leaves at the base of the plant are not unlike those of the small daisy, though larger and more deeply cleft; they are spoon-shaped, stalked and form a rosette, the stem leaves are alternate, lanceolate and sessile.

Origin of the names

The  plant’s scientific name Leucanthemum is from the Ancient Greek (leukós, “white”) and (ánthos, “flower”).

The name Daisy comes from the Old English ‘dæges ēage’  or day’s eye, as the flower opened up as the sun came up.  Its large blooms are so bright that they appear to ‘glow’ in the evening, hence the alternative common names of ‘Moon Daisy’ and ‘Moonpenny’. 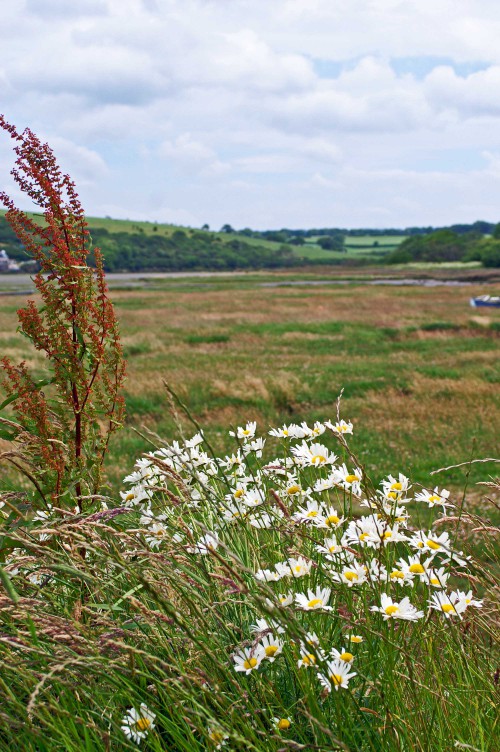